The Point Cut Diamond is widely agreed to have been one of the very first faceted diamond shapes created by humans, if not the first. This is because its octahedral shape is close to that commonly found in many naturally occurring diamonds (diamonds can also form in dodecahedral and other shapes) and the first diamond polishing methods allowed for little more than polishing of the surfaces of the natural diamonds.

The point cut diamond is believed to have originated around the mid 14th century and was popular through the 15th and 16th centuries - although there is a possibility, as yet unproven, that the art of polishing diamonds with diamond dust may have been discovered in India prior to this time. In old times pointed diamonds were nicknamed "writing diamonds" as the diamond point could score any other substance known at the time. However it appears that this use for (unfaceted) diamonds may have been much older - as the book of Jeremiah in the Old Testament states "The sin of Judah is written with a pen of iron, and with the point of a diamond." [1] Although translation of words used in ancient texts is often difficult, the substance used for the tip of a pen was elsewhere described as so hard that it could cut other stones.

Point cut diamonds were often set into rings in such a fashion that a 'pyramid' shape of diamond was visible. The Romans were known to set diamonds into rings in this fashion, however as far as we known, they did not facet the stones or polish the surfaces. A few Roman diamond rings can be seen in the British Museum into which natural octahedral diamonds have been set - and none of these shows any sign of polishing or cleaving of the stone. [2] 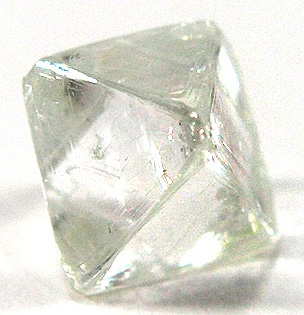 Prior to the 14th century, it appears that diamonds may have been prized more for their hardness than as jewels - and this is not surprising when one considers that prior to the advent of the diamond polishing wheel, they were extremely difficult to facet. Also, prior to faceting, a naturally occurring diamond has none of the sparkle of the cut stone, appearing dull but strangely luminous.

Until the 18th century, all diamonds that were found originated in India. In India, in ancient times, the points of a crystal were considered to have mystical power and crystals with perfect points were reserved for those of high caste. [3] In ancient India it was considered taboo to cut a diamond and destroy its natural form. However the Europeans were not quite so keen on such beliefs and the art of diamond cutting quickly progressed in Europe from the 14th century onwards - and the point cut was soon made obsolete by more intricate cuts. By the mid 15th century, diamond cutters were adding more facets to their diamonds: First the table cut, which was formed by removing the upper point to leave a flat surface like a table-top. Then additional corner facets were utilized, resulting in the single cut.

Only very few of the medieval point cut diamonds still exist: Most of the diamonds from the 16th century and before have since been recut using more advanced cuts, as this (at the time) increased their value.