Also known as the Pillow Cut, the Cushion cut diamond is so called because its upper portion (crown) is shaped somewhat like a cushion. Its shape is a "rounded square" (or rounded oblong) when seen from above the crown and because of the rounding of the sides it has a "softer" look than for example the Princess Cut. The crown of a Cushion Cut gem has an octagonal table, eight "kite" facets and twenty-four triangular facets.

The Cushion Cut is one of the older fancy diamond cuts. A forerunner of the modern Round Brilliant, it is reported to have been devised around 300 years ago . Cushion cut stones produced greater brilliance and fire than the older step cut styles.

By far the most popular diamond cut from around 1830 to 1900, it is now considered to have a somewhat antique or "retro" look, with rounded corners and large facets - but is nevertheless still a "brilliant" style. After becoming difficult to obtain outside of estate sales and antique auctions, the Cushion Cut has enjoyed a recent return to popularity. It has a total of 58 facets - and is frequently used not only for diamonds, but also for other types of precious and semi-precious stones.

There is no "ideal" criteria for the Cushion Cut, but a well cut stone will have proportions that give brilliance and fire. As an older Cushion Cut stone will often have a very thin girdle, the older stones are more likely to have damage in this area. In modern times, the Cushion Cut has evolved. Antique Cushion Cuts, also known as "Old Miners" or Old Mine Cut gems, had high crowns, larger (open) culets and were generally more "stubby". Part of the reason for this was that in the old days, one main diamond was cut from a rough - whereas today, a rough diamond is very often cleaved into two approximately pyramidal pieces, in order to maximise overall yield from the stone. Many of the original antique cut gems were refaceted into modern-style brilliants - making money for the recutter but destroying antiques in the process - however now the trend has reversed, as both the scarcity and antique look of these gems has given them renewed appeal and value.

Modern Cushion Cuts have wider tables, less tall crowns and deeper pavilions - and cushion cut diamonds with smaller culets are considered better. This is because the culet (bottom facet) acts as a "window" to whatever is underneath the gem (this is considered undesirable). [1] The modern cushion cut gem has an approximately 20 percent higher yield from the rough stone than the round brilliant - due to its shape being closer to the square cross-section of an uncut rough. [2]

Cushion Cut diamonds are not as brilliant as modern Round Brilliants but are famed for their dispersion (ability to refract light into prismatic colors).

One of the most famous - and stunning - cushion cut diamonds is the "Pitt-Regent" Diamond (also known as either the Pitt Diamond or the Regent Diamond). Typically for a famous diamond, its history seems to involve intrigue, greed, murder and misfortune (isn't this always the way?) It was discovered in 1701 in India by a slave working at the mine, who decided to abscond with the gem. Seeking a passage to safety and fortune, the slave was pushed overboard by a ship's captain who then took the gem to Madras, pawned it to a famous diamond merchant, went on a spending spree and committed suicide. 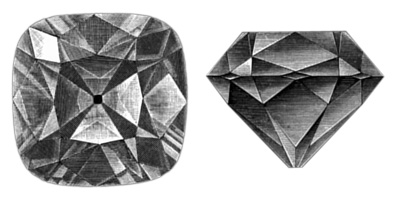 Originally weighing a huge 410 carats when uncut, the Pitt-Regent was cut into a 140.5 carat gem at the behest of purchaser Thomas Pitt, the Governor of Madras, after whom it was named. After being plagued by acute paranoia for his safety and that of his treasure, he eventually sold it to the Duke of Orleans in 1717, but not before the unscrupulous bargaining he used to obtain the gem had also ruined his reputation. The Duke of Orleans was the Regent of France, hence the other part of the name.

To cut a long story short, the Pitt-Regent, after having been variously stolen, hidden during revolutions, set into the ceremonial sword of Napoleon, pried from its mounting by his wife, set into the crown of Charles X of France, and worn in the hair of Empress Eugenie... eventually ended up in the museum of the Louvre in Paris. After successfully being hidden during World War II, it returned to the Louvre where it can be seen to this day. [3] [4]

The Pitt-Regent is renowned for its brilliance and fire - however it was made in the days before modern technology allowed the precise placement of cuts such as may be seen nowadays. Modern brilliants are crafted precisely for optimal light reflection, brilliance and light dispersion. 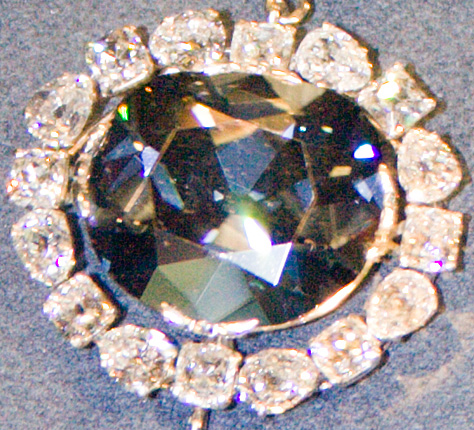 Several of the famous old diamonds were Cushion Cut. One is the Cullinan II, which is now part of the Imperial State Crown of England. Another legendary antique cushion-cut diamond is the Hope Diamond, a 45.52 carat deep blue (right). The Hope's cut is described as "Cushion antique brilliant with a faceted girdle and extra facets on the pavilion" - and it is around an inch in diameter and nearly half an inch deep. Curiously, the Hope is also the center of an old legend of a mysterious curse - as several of the stone's many owners (and even those whose hands it passed through briefly) suffered tragic fates.

When you learn their history, it's not surprising that gems such as these gain a reputation for being "cursed" - but in truth it's more likely that humans are cursed by their own avarice; and by the consequences of what they are tempted to do in order to obtain immediate wealth and power...