The French Cut Diamond is named in reference to the style of the cut: A French cut diamond might now be cut in any country! The cut was named simply because French cut diamonds were a popular style in France and possibly originated there. 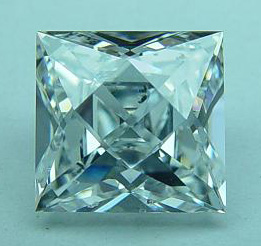 The most immediately noticeable feature of the French cut is that the crown (see images L and R) appears square when viewed from above, and has just 9 crown facets, with the square (or rhombus-shaped) table facet diagonal to the square of the crown. Adjoining the four sides of the table are four triangle facets that point towards the corners of the crown. This gives the appearance of a four-pointed star - as can be seen in the images. The crown of these diamonds is typically high and the table small. Note that the step cut pavilion design, such as the one in the image, is more recent; in truly ancient French cuts, if such stones actually existed, the pavilion would likely have consisted of four main facets in an inverse-pyramidal shape, perhaps with a small culet and four very slender lower pavilion facets.

The French Cut was not only used for diamonds, but has been widely used for sapphires, rubies, emeralds and at times for other semi-precious stones such as onyx. [3] As it is a relatively simple cut with a small number of facets, it has often been used for smaller accent stones flanking a main gem. 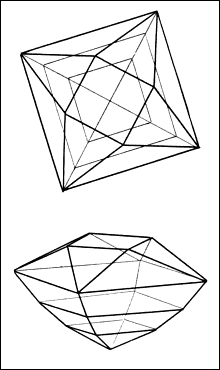 The French cut diamond is generally reported to be one of the oldest diamond cuts and to have appeared around the early 1400's. This would seem to make sense in terms of the "evolution" of diamond cutting: First came the point cut, which merely "cleaned up" the natural octahedral shape of the stones and set them with one of the points uppermost. Then, the table cut, for which the diamond cutter created a "flat top" instead of an upper point. The French cut is one of the next logical developments, adding four more facets to the crown.

However, although the French Cut is widely stated (don't you just love the internet?) to have been in use for centuries, I can find no actual mention of it from old times, and this is most unusual. The phrase "French Cut Diamond" appears to be relatively recent: No record of it occurs in literature (Google Books search) prior to 1965! Neither does the phrase "French Cut Sapphire" appear prior to 1920. [1] One source states that the French cut diamond was "new" to the Art Deco period, and so named because it was developed in Paris [2] which was one of the foremost gem cutting centers of the time. Yet another diamond mystery remains to be solved! The French cut was indeed popular in the 1920's and so, given the most unusual lack of reference visible in older literature, it seems likely that it was indeed a 20th century creation. If so, the French cut seems to have evolved from the need for a simple, attractive style for smaller stones, that has good light performance while being relatively simple to create.

The French cut was stated by one source to be fashionable in the 17th century [4], and was certainly popular in the Art Deco period of the early 20th century, as can readily be seen from jewelers' magazines and advertising materials of the 1920's, featuring watches with french cut sapphires surrounding the watch face. [5] The French cut appears to have remained a popular cut for stones set into watch faces and can be seen in watches advertised in the 1940's. [6]

In modern times, the French cut is most often seen in antique pieces, in sapphires and in very small stones, where it is used on account of its simplicity. French cut diamonds are rare nowadays, especially in larger sizes. They are typically only custom cut to order, almost always for side stones. They are generally much more expensive in this application than regular melee stones because of the necessity for custom cutting and the increased labor incurred - however they are still sometimes seen set "in channel" (i.e. in a row) as accent stones.

Another variety of French cut that is occasionally seen is the flat bottomed French cut, which as the name suggests has no pavilion; just the nine crown facets and a flat base. [4]