The Pear Cut is a brilliant cut diamond shape with one rounded end and one pointed end (when viewed from above the crown). The Pear Cut diamond could be said to be a cross between the Marquise Cut and the Oval Cut.

The Pear Cut is also occasionally called the Drop Cut or Tear Cut, as it resembles a drop of water or stylized "teardrop shape". Pear shaped diamonds in jewelry are mounted horizontally in a specific five-prong setting - with the fifth prong in the shape of a V, protecting the point.

The pear is a popular shape that has been used for many of the world's largest diamonds - including the 530.20 carat Great Star of Africa aka the "Cullinan I", the 170.49 carat "Star of Peace", the 137.02 carat "Premier Rose", the 69.68 carat Excelsior I, and the 203-carat Millennium Star. [1] The Cullinan III is also a pear-shaped diamond and weighs in at 94.40 carats. However the pear cut is not only used for large stones and pear cut diamonds may also be seen as accent stones.

One of the interesting attributes of the pear cut diamond is that it is widely agreed to make the fingers appear longer or more slender - and so may be more suited to some hands than to others. It is mounted in a ring with the point in alignment with the direction of the fingers.

Some sources have stated that the pear cut diamond is the same as the pendeloque or briolette - however this is somewhat inaccurate and a little ambiguous. The old-style pendeloques or briolettes were cut so as to be viewable from all angles, and were often drilled near the point so as to be suspended from a pendant or even a chandelier (many types of stone are cut to this shape). Pendeloques or briolettes had no crown or culet but had a rounded cross-section with facets all around.

The modern pear cut diamond however is often designed so as to be set horizontally in a ring and viewed from above, and so has a crown and a culet. The table facet runs lengthwise along the direction of the longest 'side' of the teardrop. The modern pear cut is often cut in the style of the brilliant - with 58 facets in a modified shape.

One of the advantages of the pear cut is that with certain stones, the 'yield from rough' (i.e. the weight of the finished stone) would theoretically be greater than that of a round brilliant cut from the same stone. This maximization of the yield should translate into a better price-per-carat of the finished product. 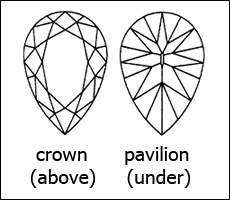 The most famous of the ancient Mazarin Diamonds - the 55.23 carat Sancy (Mazarin I) is stated by some to be pear cut [2] - however the cut of the Sancy is somewhat unique: It is a "shield" shape with no pavilion but a pair of crowns. It appeared out of the mists of time when it was purchased by Nicholas Harlai, the Seigneur de Sancy, in Constantinople in 1570, and is said to be one of the first large diamonds ever to be cut with symmetrical facets. [3] Of course, (in typical fashion for an ancient, large diamond) great mystery surrounds the true origin of the stone and it is not known exactly how old the Sancy is.