The briolette is one of the antique diamond cuts, dating from at least prior to the 19th century. It is a somewhat teardrop-shaped stone with elongated triangular (and sometimes also diamond-shaped) facets. The briolette may either have a more rounded or sometimes a more angular form; it is pear or oval shaped, similar to the Double Dutch Rose, but the upper "hemisphere" is typically much taller than the lower.

The briolette has no girdle. Briolettes are sometimes seen with a small hole drilled close to the tip, enabling them to be used as pendants. Whereas some diamond cuts, especially modern cuts, have by definition a strict number of facets, there appears to be no hard and fast rule as to how many facets a briolette should have - and in old times when the briolette was popular, the number of facets was most likely determined by the size of the stone.

An advantage of the briolette cut is that the entire stone is visible and can be viewed from any angle, as opposed to the brilliant which is designed to be viewed from above, and is often set in such as manner as much of the stone is invisible. However, this also means that any flaw in the briolette-cut stone will be more readily seen.

The Briolette and the Pendeloque

The briolette has an old history - although it is not immediately clear when the term briolette was first used to describe a gemstone cut. It was considered a type of pendeloque, although it is possible that the two terms were used interchangeably as exact definitions of the two cuts seem to cross over. 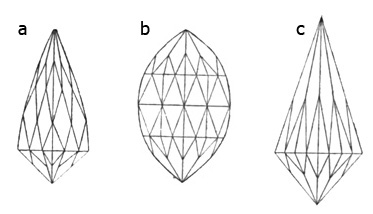 The earliest recorded use of the word briolette I can find referring to a diamond, comes from the French "Dictionnaire du Commerce et des Marchandises" ("Dictionary of Commerce and Merchandise") of 1837 [2], which states (my translation):

"Pendeloques have, like the regular brilliant, a table and a culet; but there is a type of pendeloque which is called the briolette: It has neither a crown nor a pavilion, but has the shape of a small pear. The Orientals were once so fond of briolettes that they used them as objects of adornment, without mounting them in gold or silver, they were content with drilling a small hole in the upper end of the stone, in which they threaded a silk, so as to attach them to the ears, or neck, or on their clothes."

The briolette's popularity has waxed and waned throughout its history. It was a popular diamond cut in the 19th century. A 275-carat briolette diamond necklace given by Napoleon Bonaparte to Marie Louise in 1811 is said to be on display at the Smithsonian Museum. [3]

Use of the briolette cut is not limited to diamonds, and many other gemstones have been cut in this fashion.

The Briolette of India

As with most diamond cuts, there is a modest possibility that the briolette has much older origins that have vanished into the mists of time. However the legend surrounding the most famous of all ancient briolette diamonds, the Briolette of India, a 90.38 carat diamond, appears to have been entirely fabricated - although the stone itself certainly exists.

Perhaps King Richard believed, as did other monarchs, that jewels gave them protection in battle: In 1415 King Henry V of England was reported to wear a crown garnished with many large gemstones at the battle of Agincourt.

If these tales were true, it would mean that the Briolette of India is the oldest surviving diamond of which there is historical mention; surpassing even the legendary Koh-I-Noor in age. The Koh-I-Noor's recorded history begins in 1295. However, the exact "age" of the Koh-I-Noor itself is not known - as it "appeared" out of the mists of time with no record of its initial discovery or cutting. (Note also that there are other "older" diamonds in existence: There are Roman rings in museums which have uncut diamonds set in them.)

Continuing with the tale, the Briolette of India next "appeared" when it was reported to have belonged to French royalty in the 16th century. It was said to appear in a portrait of Diane de Poitiers (though identification from a portrait could hardly be described as certification!) The stone then vanished from record again, reappearing when it was bought by Harry Winston, the famous New York jeweler, from an Indian Maharajah. [5]

On closer examination, curious discrepancies start to appear: It is stated that the stone was both cut by Cartier in 1908-9, and also lost to history until 1950! [6] Both can't be true. Also, the word "Briolette" appears only to have come into parlance in the late 18th century.

It turns out that the stone's illustrious origins may have been fabricated by Pierre Cartier: The "Briolette of India" was stated by [7] to be a South African stone discovered in the late 19th or early 20th century.

The briolette is in general currently enjoying renewed interest - not so much for diamonds, but for other gemstones.