The Trillion Cut diamond is a variation on the modern brilliant cut, with a triangular shape when viewed from above. The Trillion Cut has 31 facets (some sources say 44 - with 25 on the crown and 19 on the pavilion; perhaps they are referring to the Trilliant) in an arrangement similar to that of the modern Round Brilliant Cut and an overall shape that is like an equilateral triangle - with sides either straight or curving slightly outwards.

As Trillion cut diamonds are quite unconventional and bold looking, they were not typically used as center stones in jewelry - they were more often seen as "accessory stones" such as a pair of stones flaking a main center stone. For this reason, they are less common in larger sizes and were considered adventurous or "avant garde" as a center stone. However they are gaining much popularity as a center stone and are considered to be one of the more "popular" current diamond shapes.

The Trillion Cut was developed in the late 1970s in Amsterdam. When properly cut, Trillions are very brilliant. Their cut is often shallow and this makes them look large for their weight. [1]

Many of the triangular cut diamonds are made from macles - pieces of diamond rough that are flat and tabular; and this means that the wastage from the rough stone is less and the overall price of the finished gem may be less.

As with other modern diamond cuts, the symmetry, angles, proportions and polish are important to the quality of the finished gem. However unlike the Round Brilliant, there are no ideal criteria by which the stones are graded. [2]

As with other diamonds that have pointed corners, care must be taken to avoid causing damage to them. Diamond is an extremely hard substance - but it's not unheard of for it to break or chip, especially if handled roughly or if it has exposed, pointed corners or sides with inclusions. Trillion diamonds may be seen set in V-shaped or other tri-corner mountings in order to protect the corners.

Another triangular brilliant of recent times is the patented 50-facet triangular modified brilliant Trielle by the Trillion Diamond Company. [3] One interesting statement about the Trielle, made by the manufacturers, is that the Trielle should not be bezel-set, so as to allow light to enter the diamond through the girdle. [4] 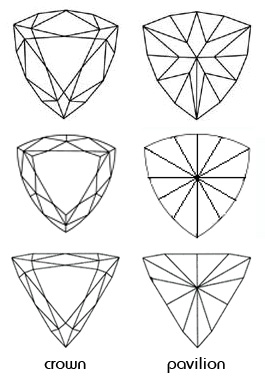 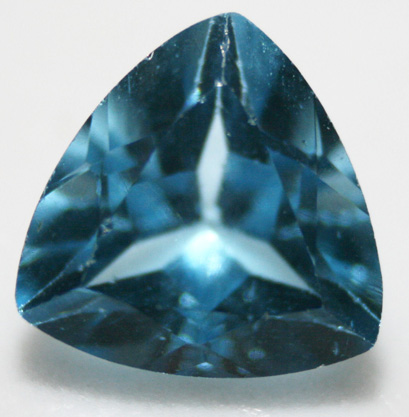