The rose cut diamond was one of the early or antique diamond shapes. It was so named because it resembled a rose bud just before it had opened - with the facets resembling the tightly-packed rose bud petals.

The rose cut diamond has no table (flat top) but a somewhat domed top (somewhere between a pyramid and a hemisphere) consisting of many facets, typically triangular, which meet at a point in the center. It has a completely flat base - in other words, no pavilion (lower area) at all. The Rose Cut Diamond's facets are often in two rows - with "star facets" (often six triangles) in the center and a proportional number of facets in the second row. However, some of the bigger diamonds of old times featured rose cuts with more than two rows of facets.

The rose cut diamond was believed to have been introduced in European cities in 1520, although some say the rose cut originated in India in around 1400. However despite having been one of the cuts of choice between the 16th and 18th centuries the rose cut had fallen from fashion among modern gem cutters by the 20th century. One of the reasons for this is that in old times, diamonds were cut more to maximize carat weight, using simpler tools - whereas nowadays, with the evolution of technology designed to bring out the full sparkle of the gems, "brilliance" and "fire" are more prized; and more of the original rough diamond tends to be removed in the process. Old rose cut diamonds have less fire than their more modern, brilliant cut counterparts - and hence they fell from popularity when new, advanced cutting techniques were devised. [2] 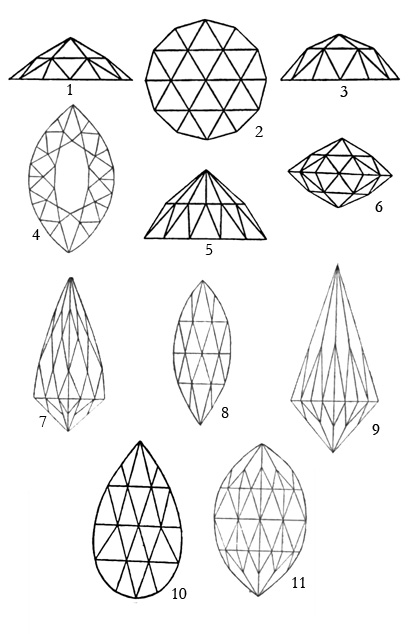 In ancient jewelry settings, rose cut diamonds were sometimes backed by a thin layer of shiny metal foil in order to reflect light back up to the crown (upper surface). [2]

Most of the old rose cut diamonds were refaceted into brilliants using modern technology - which means that true antique rose cut diamonds have become scarce and valuable. In general, antique diamonds are valued differently to modern diamonds, and comparing the two types may be misleading.[3]

Other names for the Rose Cut are the Rosette, Antwerp Rose (Roses d'Anvers), Dutch Cut, Crowned Rose Cut, or the Full Holland Cut. The Dutch references in the names reflect the fact that Holland was once the capital of the diamond-cutting world.

There are several types of rose cut: The Dutch Rose Diamond (or Holland Rose Diamond) has twenty-four facets in two rows of equal depth (images 1 and 2); the Rose Recoupee (image 5) has thirty-six; and the Brabant Rose Diamond (image 3) has twelve or fewer - with the lower row being taller and the top row more shallow. A Double Dutch Rose Diamond (image 6) is, as the name suggests, faceted both above and below to form a shape identical to two Rose Cut diamonds back-to-back. Other variations on the Rose Cut include the Senaille Cut - a Rose Cut with irregular or non-symmetrical faceting, and the Briolette Cut (images 7,9,11) - pear or oval shaped, similar to the Double Dutch Rose, but with one of the two hemispheres being longer than the other. [1] [5] The Antwerp Rose is a hexagonal form of rose cut diamond. [6]

Although the rose cut was ostensibly swept aside by the more modern brilliant cuts, there has been something of a curious revival of interest in the rose cut diamond in America in recent times. Perhaps this is in part due to their scarcity; perhaps due to the perennial taste for romance, the exotic and the antique. Interestingly enough - some cutters in India, the center of the world's diamond cutting industry, have revived the rose cut. However, many of these roses are created as replacement gemstones for antique jewelry. [4]

It's thought by some that the rose cut may have had ancient Indian origins because famous old Indian diamonds, such as the Sancy, featured a rose-like cut and are of indeterminate age and origin.

One of the most famous rose cut diamonds of all time was undoubtedly the Great Mogul. This was described by Tavernier, the French traveler, who had seen it in 1665 in Hindostan. At the time of viewing it was said to weigh 280 carats, but to have been cut from a rough stone of 787.5 carats. The fate of the Great Mogul is not known to history, and it is believed either to have been lost or cut into smaller stones - although some have ventured that the stone is either the Koh-i-Noor or the Orloff. [7]

Drawing of the Great Mogul
from an old book