The Princess cut diamond is a "fancy" (i.e. non-round shaped) brilliant cut - and is either exactly square or slightly rectangular when viewed from directly above the crown. It is quite similar to the Radiant Cut; however a true Radiant Cut diamond not only has the corners removed but has a different arrangement of facets to the Princess cut.

The Princess cut is said to be the second most popular diamond cut after the Round Brilliant - however there is some evidence to suggest that its popularity may be still higher: The Princess cut gets over three times as many searches on Google in 2011 than the total for 'round cut diamond', 'brilliant cut diamond', 'round brilliant' and 'round brilliant diamond' added together! This is a good indication of trending however is not totally conclusive - as it may be that more people already know what the round cut diamond is and do not need to research it as in depth before making a purchase. It is however certain that the Princess is a very popular diamond shape.

Development of the Princess Cut Diamond

The Princess cut is believed to have been developed from what is now called the "Profile Cut" - developed in 1961 by Aprad Nagy and used for very flat diamonds. However, the modern-age Princess cut is more suited to deep stones. According to one source, the Princess cut was developed in 1980-81 by the Ambar diamond manufacturing company [1]. However, another source states that it is attributed to Basil Watermeyer, a Johannesburg diamond cutter, who created one of its predecessors, the 61 facet square Barion Cut in 1971. [2] Either way, the Princess is one of the relatively "modern cuts" - and in the princess cut gem, cutters have sought to combine the fire and brilliance of the round brilliant cut, with the square (or oblong) shape.

When the princess cut stone is mounted in a ring, it is often difficult to tell at first glance whether that cut is a Princess or a Radiant. This is because the mounts (such as those seen in the ring in the image above) may cover the stone's corners. The princess diamond typically has 76 facets but may also have 50, 58 or up to 144 (not including culet) - depending on the manner in which the pavilion is cut. [2] There are several 'variants' on the princess cut, and diamond faceters often seek new designs both in the quest for optimum 'performance' of the stone, and also in the quest to create a new, patentable cut.

The Princess is cut either perfectly square (1:1 ratio) or slightly rectangular, up to 1.15:1 - with the perfect squares being considered more ideal and fetching higher prices.

The popularity of the Princess Cut diamond is obviously due in large part to the appeal of its shape, and perhaps to fashion. But part of the reason for the higher popularity of the Princess Cut is that they are generally more affordable than Round Brilliants of similar carat. One of the reasons for this is that the natural shape of an uncut diamond is approximately octahedral - meaning that two Princess Cut diamonds can often be created from one of these uncut stones with less wastage. The yield is higher from the uncut stone than with round brilliants - and this is a factor in the price as people tend to want "more stone for their money". However this is in some ways a trade-off, and the spread (a measurement of width and diameter, as opposed to depth) of the Princess Cut will be less than that of the Round Brilliant of the same weight. Another factor is that the Princess typically has more brilliance, scintillation and fire than other square shapes such as the older Step Cut gems. Another possibility is that because patents made on the princess cut have expired, princess cut diamonds have become readily available. [2]

The princess cut diamond is said to have had its ancient origins in the antique "French Cut" - a much more simple form of square cut which is nowadays more often seen applied to sapphires. The princess has a step modified "Double French" cut crown. [3] 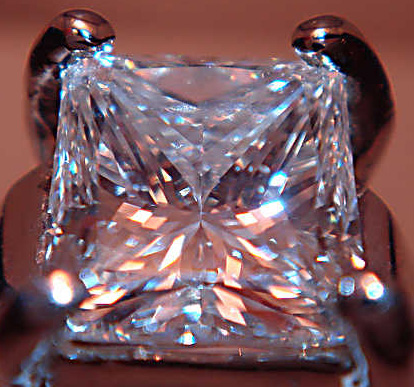 A special form of the Princess Cut is the Quadrillion Cut. The result of three years of optical research, it was developed and patented by Ambar Diamonds and is considered an ideal square cut. It has 49 facets, is always cut with perfect symmetry and ideal proportions, and was designed to maximize brilliance.[4]

One of the challenges associated with creating the Princess Cut is that the pointed corners can be prone to damage, especially if there is an inclusion near the corner. (Although diamonds are extremely hard, they can actually be chipped or even shattered... under no circumstances "test" a diamond's hardness by striking it with a hard object!) Another possible issue is that, depending on the cut, these gems can suffer "light leakage". As a result of these factors, other square cuts with tapered corners are sometimes chosen, such as the Regent Cut, Dream Cut or Tiffany Lucida cut. [2]

Traditionally, the Princess Cut diamonds were not graded for cut quality - because the shapes of fancy cut diamonds were too complex to predict accurately the light performance characteristics; however in 2005 the American Gem Society (AGS) introduced a scientific grading system for the Princess Cut diamond. [5] This system states that the Ideal Cut Princess Diamond has a Table of 62.0%-68.0%, Crown Height of 10.0%-15.0%, Girdle Thickness of "Very Thin to Slightly Thick or Thin to Thick", Total Depth of 64.0%-75.0%, and a Polish Symmetry of "Excellent to Good", although this last factor is not a primary determining factor in the AGS system.

Even despite all this, some expert sources state that ideal mathematics do not always result in the best princess cut diamonds. [6] Whereas there is more of a general consensus across the industry as to what makes the best Round Brilliant, with the Princess Cut, opinions are more varied. [7] 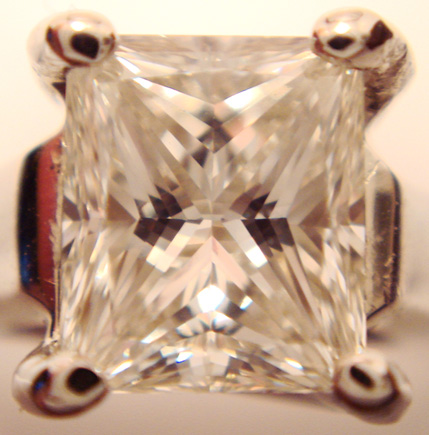