The Heart Cut is a fancy cut which not only has an ancient and illustrious heritage, but also continues to be popular in modern times. The modern heart cut often has 59 facets. The heart cut diamond is, unsurprisingly, often considered the most "romantic" of the diamond cuts, and is typically given as a lovers' gift in modern times - such as a Valentine's Day or anniversary gift. However, in old times the heart cut stone was not necessarily reserved for lovers' gifts - and may have been given as a gift by royalty to other royals, or simply purchased for personal enjoyment and display.

A well-cut, modern heart diamond will exhibit great brilliance and fire. If a rough stone has a flaw, it may be possible for the cutter to use the heart shape for the stone, removing the flawed area and thus maximizing the overall carat yield from the rough stone. In a ring setting, the tip of the heart-cut gem is often mounted within a V-shaped prong for protection (as seen in the image below), while the structural support is provided by prongs (typically four others) holding the rounded edges.

Although the cutting of a heart shaped diamond must have been a considerable challenge in old times, there are many stories of heart cut diamonds from ancient days.

Perhaps the oldest mention of the heart-cut stone is that of the legendary (and notorious) Duke of Milan, Galeazzo Maria Sforza (1444-1476), writing a letter to Nicodemo in 1463. In describing the literary pursuits of the wealthy and powerful Cosimo de Medici, Sforza stated: "He commands a Titus Livy just as you might a heart-shaped diamond." [1]

This intriguing statement would appear to verify that such a stone was actually known in those days. The implication in Sforza's letter is that such a stone was considered a fashionable commodity amongst the Milanese elite of the day; or was perhaps even a reference to an expensive purchase that Nicodemo had already made. It is quite possible that the stones referred to here may have been pioneered by the legendary diamond cutter Lodewyk (Louis) van Berquem, whose new techniques included the creation of the diamond polishing wheel. At this time, Van Berquem had recently discovered that diamonds could be cut by their own dust (1458). He also introduced the idea of absolute symmetry of facets. [2]

It is recorded that in 1562, Mary Queen of Scots sent a ring to Queen Elizabeth a gold ring with a "diamond made like a heart". [3] 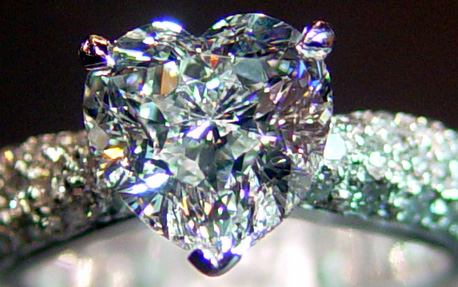 The wealthy and powerful Cardinal de Richelieu (1585-1642) was known to own a celebrated heart-shaped diamond weighing twenty carats. The diamond is widely stated to have bought from Alphonse Lopez and willed to the king. [4] [5] Alphonse Lopez was a wealthy diamond merchant and art aficionado who had settled in Paris in 1610, and became a financier and confidant to Richelieu. [6] Lopez was evidently immensely rich - and is also recorded as having purchased famous paintings at auction in Amsterdam in the late 1630s. [7]

Cardinal Mazarin's famous set of 18 Mazarin Diamonds were reported in 1691 to include three heart-cut gems, all of which were between 20 and 25 carats. Of the three heart shaped Mazarin Diamonds, only the whereabouts of "Mazarin IV" is still known. [8]