The European Cut, or Old European Cut, is considered the predecessor of the modern Round Brilliant Cut diamond. The European Cut diamond was developed in the 19th century and became very popular: Prior to that era, diamonds were only affordable to the wealthy and elite. However, extensive diamond finds in South Africa flooded the market with more attainable gems. Old European Cuts diamonds was originally hand faceted as the cut was developed before modern diamond cutting technology, such as diamond saws and jewelry lathes came of age. [1]

As with the round brilliant, the European Cut was cut with 58 facets - however the Old European Cut diamonds were still from an era when diamonds were cut with greater regard to weight retention than to brilliance. Compared to today's Brilliants they are tall, have small tables, heavy crowns, open culets and deep pavilions - however the Old European Cut had a more rounded (or oval) shape and shallower pavilion than the Old Mine Cut gems that came before it.

The European Cut came from an era before "Ideal Cuts" had been invented, and so antique European Cut diamonds do not have the perfected proportions and subsequent sparkle of modern rounds - however many consider them to have great old-world charm, unique beauty and strong personality; and it's worth bearing in mind that in their day they had greater scintillation than had been seen in the more simplistic cuts of still older times. [2]

After a lapse in popularity caused by the development of more sophisticated cuts, the Old European Cut has had a recent resurgence in interest, no doubt due in part to an increased interest in vintage and exotic fashions.

Another probable, if ironic, reason for the renewed interest - as with other antique diamonds - is that many of the antique Old Europeans were recut in order to make modern brilliants (and turn a profit); hence they became scarce and more valuable (which in turn has diminished the practice of recutting them into brilliants!) Rarity of an item from a bygone time causes a mystique all of its own... and it's said that some cutters are now even beginning to fashion new diamonds this way.

Antique diamonds should not be judged by the same criteria as modern brilliants, and it is to be expected that their proportions and brilliance will not be engineered to the same standards as a modern diamond. It is also to be expected that they have minor flaws or damage caused over prolonged periods of use and often how they were stored or handled over time. As with some other old diamonds they may have very thin girdles and can be prone to damage as a result. Remaining Old Europeans will most likely be found in antique jewelry and a large part of the market for the gems goes to replacing missing stones in antique/estate pieces. 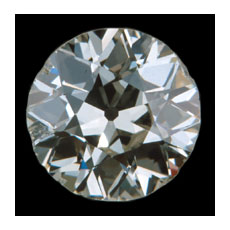