The Emerald Cut Diamond is a type of step cut, and was so called because, as the name suggests, it was a cut commonly applied to emeralds. The cut was originally developed because emeralds often contain many inclusions (internal flaws), making them prone to breakage. The cropped corners of the emerald cut limit the risk of broken corners - and it was soon realised that the Emerald Cut would also be a good one for diamonds.

The Emerald Cut is very similar to the Asscher Cut - and has a pavilion cut with rectangular facets. However the Emerald Cut is more a 'rectangular octagon' than a 'square octagon' when viewed from above the crown - with a typical Length / Width Ratio of 1.40-1.75 as opposed to the highly or even exactly square 1.00-1.05 of the Asscher Cut. [2] Also, as the emerald cut is rectangular, the pavilion of the stone does not end in a culet (very small bottom facet) but in a "keel" - a ridge between the last two rectangular steps of the longest sides.

The emerald cut typically has 58 facets (25 Crown Facets, 8 Girdle Facets, and 25 Pavilion) - and has three rows of "steps" top and bottom.

Step cut stones such as the Emerald Cut are considered to be not as brilliant, bright or fiery as brilliant round cut diamonds [3] - but due to their long facets can create dramatic light flashes. The emerald cut has a sophisticated "classic" look and accentuates the diamond's transparent clarity, depth, color and lustre (surface reflectivity). The Emerald cut will however be more revealing of eye-visible inclusions and lower color than some other cuts, and diamond experts advise care in selecting a high quality stone.

The first emerald cut diamond engagement ring recorded in history, was the one given by Archduke Maximilian of Austria to Mary of Burgundy - in 1477. Since then, the emerald cut has often been considered appropriate for larger stones, and has developed something of a reputation for being chosen by the wealthy and powerful - although Emerald Cut diamonds may often be noticeably less expensive than a round brilliant of the same weight.

Indeed, some very large and well known diamonds have been emerald cut - including the 142.9 Carat Jonker I (which has been called the most perfectly cut diamond in existence!), the 41.29-carat Jonker II and the 38.10-carat Pohl Diamond; all three of these were cut by Lazare Kaplan. [5]

Emerald cut diamonds were popular in the "Art Deco" period of the early 20th century - but have seen a recent resurgence in popularity. hey have been seen to be worn by several celebrities - including Lady Camilla Parker Bowles, Nicole Richie and Paris Hilton. Also, the 12-carat engagement ring worn by Melania Trump was an emerald cut diamond. [6]

Other names for the Emerald Cut include Octagon Cut, Step Cut, Stair Cut and Trap Cut.

As is the case with many other diamond shapes, some modern designers have sought to advance the design of the Emerald Cut with the aid of technology. One example of this is the PrinceCut, patented in 2000, which is a form of Emerald Cut with more facets, elongated sides and cropped corners. [7] 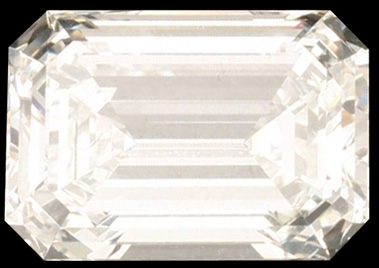 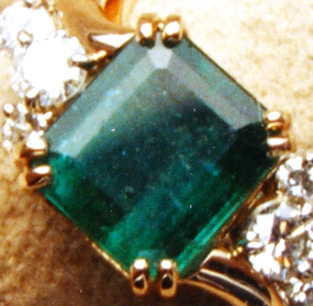 Emerald cut emerald in a ring setting
Image by gemteck1, lic. under CCA2.0.