The Baguette cut is a fancy antique diamond shape with a long history. As the name suggests, it is a diamond that is long and slender - and a baguette cut could be seen as a form of elongated Emerald Cut. Baguette cut diamonds are "step cut" and are often used to accentuate a central stone.

The Baguette cut has been in use since at least the 17th century but although its origins are ancient, the baguette cut is unusual in that it is still used in modern times. (Most of the old antique gemstone cuts are considered obsolete). Nowadays the baguette cut is used for small, accent stones rather than for larger gems.

The baguette cut evolved from the hogback, an earlier slender diamond shape in use since the 16th century which had either a ridge along the top or a simplified crown with a single row of "steps" and a long, rectangular table. The baguette was simply a hogback with the top flattened to form a table facet. [2] Hogbacks and later baguettes were used in multiples in old times to form shapes such as Christian crosses, letters or other shapes. The stones used would typically be of very similar size.

It is often assumed that the baguette cut was named after the bread stick of the same name. This is incorrect: The word baguette was not used to describe bread prior to 1900; and none of the French-English dictionaries prior to that date connect the word baguette with bread.

The word baguette is a very old french word, generally meaning a stick or rod. However, Randle Cotgrave's 1673 "French and English Dictionary" describes one of the meanings of the word baguette as "little jewel". The same work also describes a bague as a "ring or jewel set with one precious stone, or more". So perhaps there was an element of word-play in the old French name, with the name meaning both a little jewel and a little rod. Nonetheless, the bread stick called the "baguette" came later.

The step cut baguette does not have the sparkling "fire" of the modern round brilliant; however it can highlight a diamond's whiteness, luster and clarity. Baguette cut diamonds enjoyed a surge of popularity during the "Art Deco" period (1920's-30's). [1] 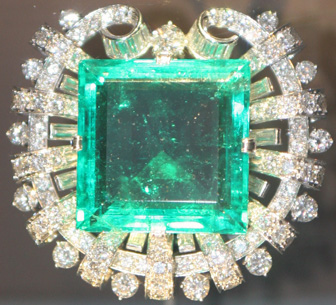