The unique Asscher Cut Diamond is similar to the Emerald Cut - with square, step-cut crown and pavilion facets, and cropped corners on both crown and pavilion leading to an almost octagonal shape when viewed from directly above the crown. However, the Asscher's overall shape when viewed from above the crown is square / octagonal (1:1 or close to it) as opposed to the more elongated oblong of the Emerald cut. The pavilion of the Asscher Cut is unusual - with all facets step-cut in horizontal rows down to the culet.

The Asscher Cut was developed in 1902 by Joseph Asscher of the renowned Asscher Diamond Company of Holland, and was designed to highlight the clarity of the finest stones. In 1907 Asscher was employed by the British Royal Family to cut the famous 3,105 carat Cullinan Diamond - and the nine largest stones made from it are now part of the British Crown Jewels. [1]

Other famous stones have been Asscher cut - including the Porter Rhodes diamond, recut from a 73-carat Old Mine cut to a 56.6-carat Asscher.

The Asscher Cut is sometimes called a "Square Emerald Cut" - although according to Asscher themselves, it should not be: A standard square emerald cut is often not cut according to the specific criteria of Joseph Asscher's original 1902 design. [2]

After limited production, the original Asscher Cut peaked in popularity in the 1920's [3], but was less popular between 1930 and 2001 and the genuine article became hard to obtain. However, aided by advances brought to the diamond industry by modern computer technology, in 2001 it was relaunched with new specifications and a new worldwide patent - as the 74-facet Royal Asscher Cut.

Interest in the Asscher cut has come alive since then, aided by celebrity purchases and televised publicity: In particular the Asscher cut was featured on the television show "Sex and the City" which sparked great interest. The Royal Asscher is now in high demand. 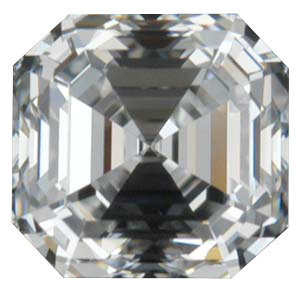 Asscher cut diamond viewed from above.

Genuine Royal Asscher Cut Diamonds bear the Royal Asscher Cut logo and a unique identifying number, laser inscribed microscopically small - and these gems command exclusivity and a high price. Genuine Royal Asscher Cut stones are also guaranteed to be conflict free and come with independent certification. [4] Indeed, Royal Asscher has been recognized for their work in assisting the Kimberley process (an international initiative working against conflict diamonds) and Edward Asscher received a Knighthood for his efforts from the Order of Oranje Nassau in 1999. [5]